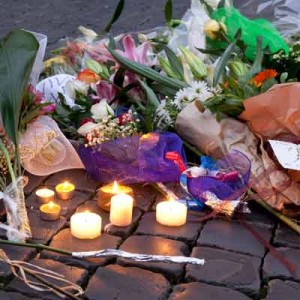 The repercussions of a terrorist attack go further than the terrible loss of lives which are incurred.

The recent November 13th Paris attacks brought very literal devastation to Paris life when they unfolded. But they also inflicted a heavy emotional toll on a much wider scale. By bearing witness to the traumatic events which an attack brings with it, the damaging effects are felt by all those who were there and survived. Many of these witnesses will suffer with Post Traumatic Stress Disorder as a result of having faced such violence and death so close at hand.

It is too early to properly assess the full extent of this psychological impact as, following major trauma such as this, the initial protocol is one of watchful waiting. During these early weeks it is very normal that everybody involved will be feeling a wide range of emotions from numbness and fear, to anger and frustration. For many people these feelings subside naturally as they are processed and some sort of grounding is retrieved through familiar life routines, and the support of others. For others, symptoms inflicted by the memories of the traumatic events persist going forward, and in these cases people need to be treated for PTSD. Prolonged recurrences of disturbing flashbacks, nightmares, and physical sensations, such as pain, sweating, nausea or trembling are all symptoms of PTSD, which can be treated through a range of psychotherapeutic treatments such as CBT, EMDR, Sensory Motor Therapy and others.

Trauma Through The Television?

There are another group of people who are also at risk when major traumatic events such as the Paris attacks arise. The intensity and scale of the social media and news coverage means that there is also the very real potential for those who are witnessing the events from afar to be traumatised by what they are seeing too. In a BBC article covering this topic psychologist Dr Pam Ramsden explains, “because we’re watching it and seeing people who are directly affected, what we have a tendency to do is place ourselves in those positions and that’s where the PTSD comes from,”.

This idea of remote traumatisation is not a new one, with studies following the 2001, September 11 attacks in New York revealing this concept in action. A Forbes article on this subject features one such study of New Yorkers, in which it was shown that almost 6% developed PTSD a year after the attacks, and that watching at least 12 hours of September 11 attack anniversary news coverage gave rise to three times the likelihood of developing PTSD for those without previous symptoms.