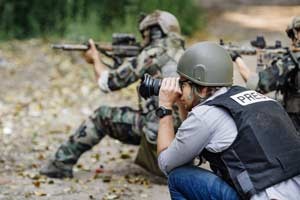 War and conflict do not discriminate when they attach their emotional scars and burdens to those who live through them. By entering a conflict zone, when they are covering war stories, journalists are exposing themselves to many of the same risks of suffering from mental health illnesses, such as Post Traumatic Stress Disorder (PTSD), as the soldiers and civilians they encounter there.

In his recent article on the subject, Eric Newhouse, highlights research which has ephasised this point, collecting data from 57 journalists who were involved in covering traumatic events in Kenya, such as the 2007 election violence which accounted for many hundreds of deaths. The study reports that, “These hazards can explain why the lifetime prevalence for post-traumatic stress disorder in journalists who have worked for over a decade in zones of combat approaches that seen in combat veterans and exceeds five-fold the rates in the general population. The study hopes that such data will help to inform the employers of journalists and photographers, and make them more aware of the long-term implications of covering such traumatic events.

Eric Newhouse has long been championing PTSD awareness in combat veterans, and helping to bring the individual stories of many sufferers to light. In his book, ‘Faces of Combat, PTSD and TBI: One Journalist’s Crusade to Improve Treatment for Our Veterans‘, Newhouse tries to illuminate the extreme challenge which returning soldiers face, when trying to fit back into ordinary civilian life. As he puts it,

You can keep up with the lastest news from Eric Newhouse at his website, where his blog posts often focus on the topic of PTSD.

Dr Claudia Herbert and the team at The Oxford Development Centre have a strong reputation in the field of PTSD, and have helped many combat veterans, as well as journalists and wartime photographers, to overcome the trauma which followed them back from their exposure to wartime experiences. They have found that the silencing that surrounds those affected by these experiences often maintains the PTSD and hinders successful recovery.  At the Oxford Development Centre each person will be offered an individually-tailored treatment plan that takes account of particular circumstances aimed at enabling the safe processing of traumatic experiences in order to encourage integration, transformation, recovery and inner growth.  The fact that recovery from PTSD symptoms can be achieved with the appropriate specialist psychological expertise, adds weight to the need for their existence to be better acknowledged by those responsible for sending people into conflict scenarios.

Claudia is an Associate Fellow of the British Psychological Society, an HCPC Registered Chartered Clinical Psychologist, a UKCP and BABCP Registered Cognitive Behavioural Psychotherapist, an EMDR Europe accredited EMDR Consultant and an ISST Registered Schema Therapist. She is also an Applied Psychology Practice Supervisor (RAPPS). She works within a holistic framework and, where appropriate, embeds in her work approaches from various healing and spiritual traditions around the world.
Go to Top