‘Understanding Your Reactions To Trauma’, helps Ukrainians After Conflict

Previous Next
‘Understanding Your Reactions To Trauma’, helps Ukrainians After Conflict

‘Understanding Your Reactions To Trauma’, by Dr Claudia Herbert from The Oxford Development Centre, was recently published in Ukrainian, and is available to the Ukrainian public, and is also being distributed by the Ukrainian authorities to help soldiers and their families who have been affected by trauma.

This new translation of the book was presented earlier in September in Lviv, at Lviv International Literature Festival. Dr Roger Solomon, American Psychologist and director of Critical Incident Recovery Resources and co-director of Buffalo Center of Trauma and Loss and Senior Faculty Member of the EMDR Institute wrote the introduction to the Ukrainian edition of the book. He expresses, that the publication of this book is very timely for the citizens of Ukraine as they have experienced significant trauma.  He writes, ‘Claudia’s knowledge, broad clinician experience, and depth of understanding enable her to take complex concepts and make them understandable’, and that, ‘the reader will find her book practical and helpful’.

The idea for this translation was brought forward by Ukrainian 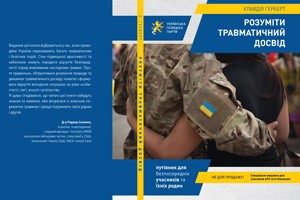 psychologist Oleksandra Yakym, who also oversaw the translation, and has been working hard to create two editions of the Ukrainian version of the book. One is to be made accessible to the general public, and the other has been adapted slightly to cater specifically to the needs of Ukrainian servicemen and their families, and will be distributed to them free of charge.

The original edition of, ‘Understanding Your Reations To Trauma’ was the first self-help book on trauma written in the UK . It was written at a time when, in the United Kingdom, not much was known about the psychological effects of trauma. Dr Herbert was among a small group of psychologists who were at the forefront of developing effective psychological treatment methods in the United Kingdom for people who had experienced trauma. She wrote this book to empower those affected by trauma as she observed so many survivors and their families feeling utterly overwhelmed, confused and helpless in the face of their symptoms, which they often did not understand to be the consequences of the trauma they had endured.

The book has, over the years, helped a large number of English speaking people with their recoveries from traumatic experiences and has been translated into several other languages around the world. Hopefully this new Ukrainian edition will  provide help and empowerment for those Ukrainians and their families affected by trauma. Dr Herbert writes in her foreword for this edition that she hopes the book, ‘will help survivors draw on its knowledge to regain their strength, re-claim their power and heal from their trauma’. She hopes the book can help to bring healing and peace to those affected by the trauma which conflict brings with it.